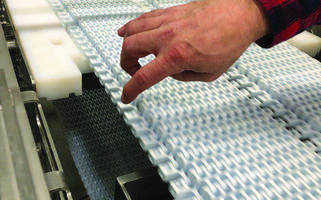 When the reject-fault-alarm system senses metal on either of the two simultaneous running lanes of thermoformed food product, the pneumatically actuated discharge end will extend or retract allowing both lanes of product to be rejected or continue concurrently.

“We’re taking the product from a wide format center-to-center, from conveyor to conveyor, off of a dual-lane check-weigher, that needs a little more room for the load cells. Going through a metal detector to inspect the product for metal contamination, and if the metal detector senses the contamination, there’s a reject signal that is timed as far as where it retracts and how long it retracts for the duration to dump out the product from both lanes at the same time.”

Using demo trays with randomly placed pieces of metal, you’ll see the uncontaminated trays proceed while metal sensed trays are retracted and rejected off the line for further inspection. The pneumatically actuated discharge end extends or retracts 12”, rejecting both lanes of product.

Jerry continues, “The metal detector sensed and picked up the metal and then times it to retract at the proper time. But, the other cool thing about the conveyor, it’s fully welded, ground and polished for meat and cheese applications for sanitary requirements. It’s open channel, nice and easy to clean-out if product does fall inside (the conveyor). You’ve got removable rollers, spacers on all the supports and all the bearings, and all the return rollers underneath. And then there’s a cover on here as well.”

The stainless-steel hygienic conveyor’s safety shield cover is manually placed into position during operation and is easily removed for operator equipment access.