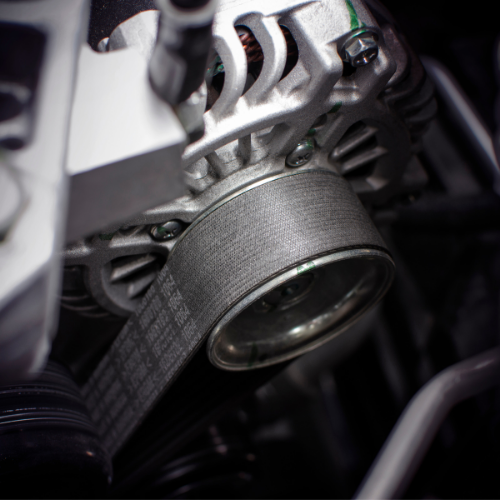 According to Car Treatments:

Unless you drive a Tesla or other electric vehicle, your car or truck has either a timing belt or timing chain (not both). So what’s the difference between the two? Keep reading to better understand the timing belt vs timing chain comparison.

Before making this comparison, it’s good to have a bit of background information about why mechanical engine timing is so critical for proper functioning of a standard internal combustion engine.

Important of Engine Timing
Given that an internal combustion engine has many moving parts that are functioning in unison to ensure that power is given to the drive train, proper timing of the internal components is crucial for maintaining engine functionality.

Timing belts and chains are engine components which are almost always impossible to see when first opening the hood of a vehicle, and this is because they are shielded from the outside elements by a protective plate within the engine.

Rocks, sand, ice, mud, and any other outside particles are things that should never be allowed into the timing components of the engine simply because if the timing is disrupted in any way, this can be catastrophic for the engine.

Without a timing belt or chain, it would be impossible to run an internal combustion engine because the parts would not be moving in the correct formation. Now that basics of engine timing have been covered, it is time to consider the differences between a timing chain and a timing belt.

Differences Between a Timing Belt and Timing Chain
Timing Belt

The first rubber timing belts were utilized by a car manufacturer called Pontiac, and this was way back in the 1960’s. These timing belts, while made of rubber, also had some kind of strengthening material built into them in order to ensure that they would be durable enough to stand up to the intense conditions of an internal combustion engine.

Some examples of material types that can be integrated into a rubber timing belt include Kevlar or fiberglass; both of these materials serve to add considerable strength to the belt. That said, a broken timing belt is usually quite serious so replacing it according to the car manufacturer’s stated interval is something that shouldn’t be ignored.

The manufacturer recommended life span for a timing belt is usually around 60,000 to 100,000 miles, though this number can be more or less depending on the specific make and model of the vehicle. Check your owner’s manual for the exact replacement interval.

A timing chain is similar to the rubber belt version, except that it is made out of all metal components. A timing chain has an appearance which is remarkably similar to a bicycle chain, except it’s less greasy, larger, and more durable.

One of the best aspects of having a timing chain versus a timing belt in an internal combustion engine is that a chain is almost always more durable and has the potential to last the entire life of the vehicle. A timing chain failure is much less common than a timing belt failure.

While not every timing chain will last this long, they do tend to last longer than rubber timing belts. One of the only negative aspects of having a timing chain is that it is heavier, so if the chain breaks while driving, the damage to the engine is likely to be catastrophic.